The weather here has been hit and miss lately: we’ll have one beautiful day of strong, warm sunshine and then five days of persistent light rain and general dumpiness.  “Good days for chicken Parm(esan)” one friend remarked the other day, and it seemed to sum it up just perfectly.

But Lauren of the Upper East Side Chronicle left me with chocolate bread pudding instead of chicken parm, and as long as I remember to microwave the dessert before applying whipped cream, I’m quite happy with her decision.  She’s posted the recipe for you, too, here. 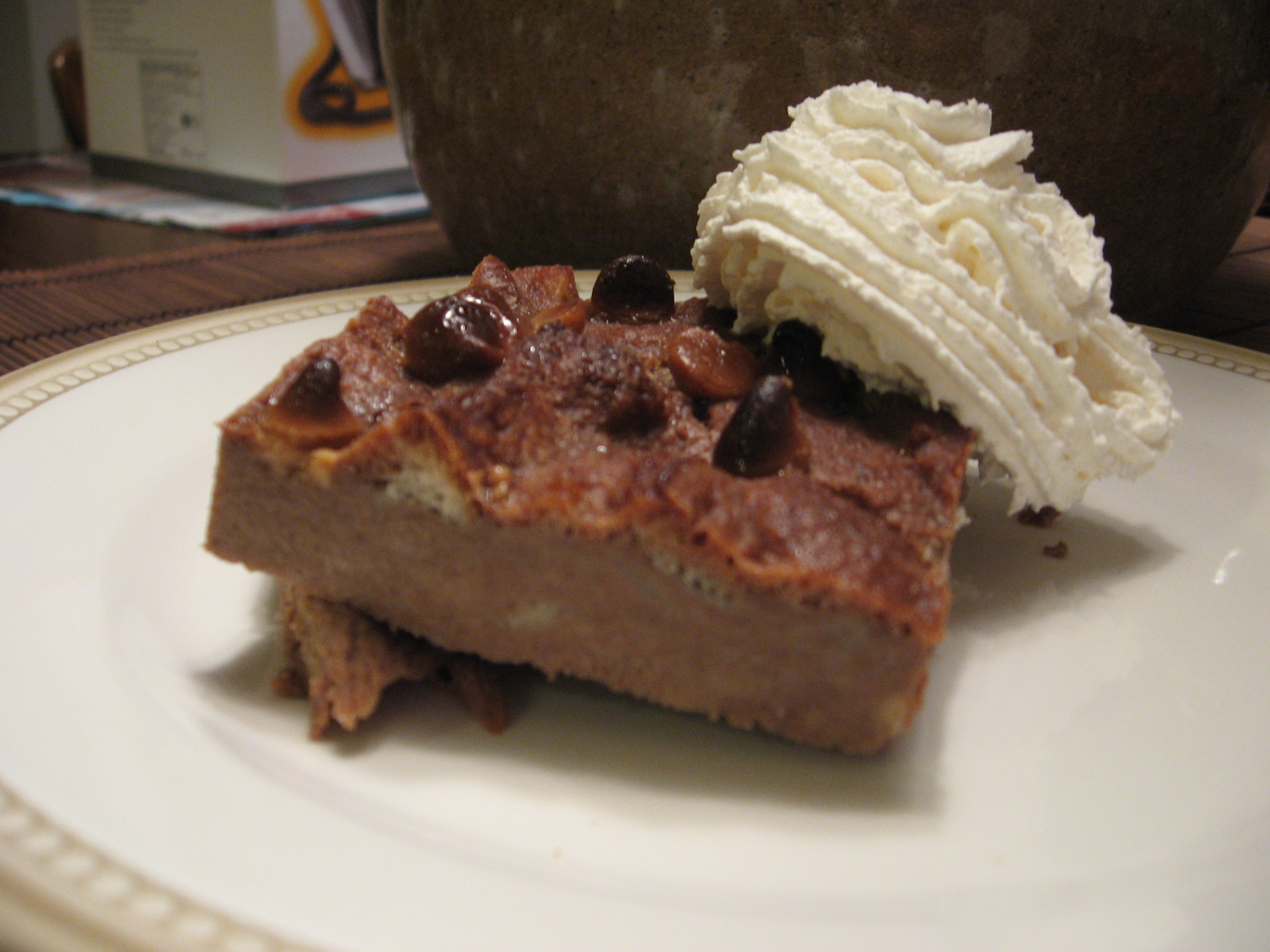 I love bread pudding, but it’s usually filled with vanilla and maybe bourbon or bourbon cream, so I was a little freaked out by the idea of bittersweet chocolate.  I decided I’d think about that at the grocery store – one of many things to think about, it turned out.

Sadly, the dairy producers do not consult with cookbook writers when they size their products (sort of like Steve Martin’s Father of the Bride rant about hot dogs vs. hot dog buns), so I did some creative recipe re-jiggering to make it all work without a plethora of dairy products in my refrigerator.

The end result was a delight! Dense, not too chocolate-y or overly sweet, and even kinda pretty to look at with those browned peanut butter chips on top. Whipped cream – even the fake kind from the can – makes everything better.  I’m a fan and I’ll be making it again next winter, I’m sure.  I just don’t see it as part of this weekend’s BBQ.

Like my TWD colleague over at EzraPoundCake, I too have let several bags of spinach die in my refrigerator.  But she’s inspired me to change my ways, and so I tried her spinach and feta orzo salad.

But I couldn’t find orzo in my local grocery store, so I used salad macaroni. I poured myself a glass of malbec and added too much red onion, a small can of sliced sliced olives and a scoop of leftover pesto sauce for fun, and it was fabulous – if not the most attractive dish out there, I certainly enjoyed eating it. I bet it would be good with chicken straight from the grill, too.  Hhhmmmm… 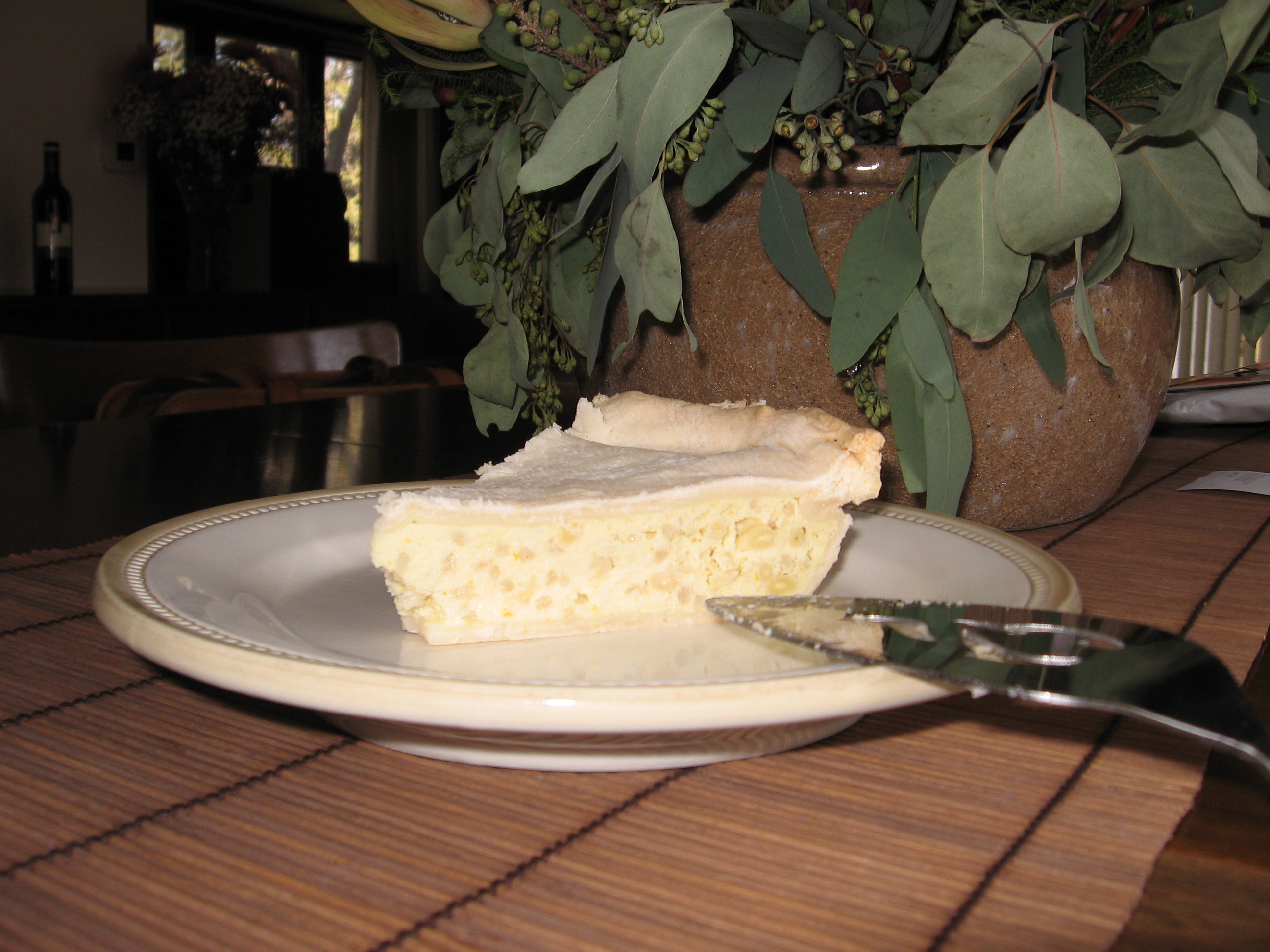 Easter morning after church my husband and I broke into Barb’s Easter Pie. It’s sweet but not overly rich, the perfect spring dessert. The eggs fluffen up and lighten the cheese (this is not nearly as dense as a New York style cheesecake) and orange zest makes it all taste a little brighter – a true signal of longer days and warmer mornings in the Midwest.

My recipe is the same as Giada’s, but I use refrigerated pie crusts instead of pastry. My crust doesn’t brown, either, so watch the oven.  I bet this would be really nice with a glass of Prosecco….

Oh, Dorie, how I’ve missed you!   Moving went as well as can be expected, but the few weeks I spent eating down the pantry (canned soup, jarred sauce, and frozen meals that I didn’t want to pack and move) were hard on me. I’m so glad to be in the new house, largely unpacked and back to cooking.  Sing for your Supper’s choice of Banana Cream Pie – even though I kinda screwed it up – was a great way to start back in!

Check out that stove!

I made a half-batch of the cream and filled tiny graham cracker crusts with banana slices, the cream and Cool Whip from a can.   But I did make a special trip to the store for vitamin D milk!  My custard didn’t turn out quite as creamy as many of the photos appear, which I’m chalking up to the learning curve of the electric stove I inherited.  And when I started to bake I had only unpacked half the spice rack so I used pumpkin pie spice instead of cinnamon and nutmeg, but the flavor was fantastic!  So much better than my go-to sugar free instant pudding with vanilla wafers and cool whip.

AND I got to try out the “new” stove.  There is definitely a difference between gas and electric, but I think I will learn to love this machine as long as it’s still working – the odd shape and size combined with the lack of gas line in the kitchen island make me think I’ll have it fora L-O-N-G time….

There are some days when you smack your forehead and say “Why didn’t I think of that?!?”  Click here to check out Bacon Du Jour and see if this is one of those days. It’s the latest project by one member of the Association for Women Journalists Chicago Chapter.

The concept is simple: every day they wrap something in bacon to see if it  tastes better that way. They take a photo and then  rate it using a bacon pun.

I was sad that the bacon-wrapped Peep didn’t work so well,  and  kind of grossed out by the bacon-wrapped pickle, and still other pairings have been inspired in a college dorm food sort of way.  But the site never fails to fascinate me in a way that makes people walking past my office wonder why I am making that face.  That must mean it’s a good site.