I always, always cook with the group, but rarely do I get around to posting in a timely manner. Know that this dinner was enjoyed on a really cold Saturday night when my oldest child was playing board games and eating pizza at a friend’s house, and the little one feasted on chicken nuggets and canned fruit while I hovered at the stove. 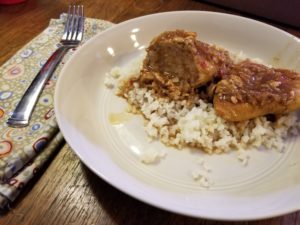 Today, rather than post about the preparation of food, I offer my commentary of food-related current events. From the Jackson (MI) Citizen Patriot, via MLive.com:

An Ypsilanti man is accused of stabbing his mother in the back with a dinner fork and clubbing another woman over the head with 10 pounds of frozen chicken.

It’s kind of a convoluted story about a 40-year old man with a criminal record waking his mom up in the wee hours of the morning and demanding cash, and then stabbing her with the fork (the attack drew some blood but did not cause serious injury) when she said no, but the chicken incident happened separately:

(The prosecutor) Blumer said that a day after he stabbed his mother, McKaney was riding a bicycle at 7:30 p.m. Monday when he encountered two women talking on the sidewalk on Woodbridge.

“He said something nasty to them and they responded in kind,” Blumer said.

“He jumped off his bike and hit one woman over the head with 10 pounds of chicken.”

The woman was treated at Foote Hospital, and had five staples in her head, Blumer said. The husband of the victim in the poultry assault trailed McKaney in a pickup truck and flagged a responding officer on Biddle Street, Deputy Chief John Holda said.