Maybe my Tuesdays with Dorie experience has spoiled me, but I’m just not that into Ellie’s Triple Chocolate Cookies.

The cookies came out kinda flat and the crackled a little around the edges (even on my silpat), so they weren’t especially cute by themselves.  But they added a lot of color to the cookie basket I brought to my uncle’s home on Christmas day, and that can’t be undervalued. The basket also had blondies for the kids, eggnog bread, and some of Dorie‘s buttery jam cookies made with cherry jam and pumpkin pie spices. A separate box had mock turtles (pretzels topped with a melted Rollo candy and half a pecan) so that the nut oils couldn’t contaminate anything else that might otherwise be enjoyed by one allergic guest.

It’s not secret that I’m not a huge fan of overly chocolate stuff, but I thought the cookies had potential.  I wasn’t thrilled with them, but the kids were!  They were gone before we all got up from the table!  Points to Ellie for getting the kids to eat whole wheat flour after a H-U-G-E Italian dinner of stuffed shells, meatballs and sausage.

You can find the cookie recipe at The Feast Within, including the blogger’s improvements to make less flat cookies. Her photos highlight her beautiful cookies and successful modifications.

I’ve never been a fan of squash (I’m not sure exactly what it tastes like, but I’ve never found it enjoyable, however it’s been disguised) but I had high hopes for this soup. I thought the combination of curry and honey would help me choke it down.

Now, I recognize that I had the same high hopes for the squash mac ‘n cheese that Ellie gave us a few weeks ago, and I was sadly disappointed, but I’m trying to eat more vegetables of different colors, and so I tried the soup.

Meet me in the Kitchen made this week’s selection, and you can find the recipe at her blog.  Some of the comments suggested that the curry made the soup too spicy or that the honey made it too sweet, but I don’t necessarily agree with either reaction.

I added apple chicken sausage and oyster crackers to disguise the  stuff, and still it was squash soup.  I liked it, but I’ll never crave it. I might make it again when I am swept by a wave of health consciousness, but I’m not gonna hold my breath for that day to come.

It looked nice in the bowl, though, don’t you think?  And the Other Eater in my Household enjoyed it very much.

I think next week may be the final test for Ellie’s book. None of the recipes have really bowled me over so far, and I’m beginning to lose interest in the book.  We’ll see how the cookies recipes stand up.

I really like trying recipes I find in magazines, and I highly recommend  you seek out the cookie recipe I clipped from Real Simple magazine last weekend. You’ll find the recipe here.

The cookies are flavorful like a gingersnap, cake-y like a good Toll House bar, and also a little bit chocolate-y. I used half semi-sweet chips and half white chips because that’s what I had in the house, but I think I would do that again – the white chocolate goes nice with the spice.

This is once instance where it totally pays to buy good spices – and you’ll know when you have good spices because the old stuff in your pantry will smell like the plastic bottle it’s packed in.  I buy all of mine from The Spice House, an Evanston store (well, there are several, actually) that reminds me of the land that time forgot.  The whole place is kinda musty, with spices and potions and herbs in big apothecary jars.  You have to ask someone to get you a small bottle from the bulk supply, but the people are all so nice and knowledgeable that it’s kinda nice to have their undivided attention while they fulfill your requests.  They also have some amazing blends for different meats vegetables, but I digress….

I appreciate Ellie’s efforts, but I still don’t like eggplant.

This week the bloggers who crave Ellie in their Bellies worked on a roasted vegetable tart, built in a cornmeal and wheat flour crust. You’ll find the recipe here.  The combination of eggplant, zucchini and tomatoes, all roasted before being slathered with cheese and herbs and baked, really appealed to me. But the execution fell short. It’s still a bunch of winter vegetables that I really don’t care for. (But I ate it with a glass of this Michigan wine, which makes everything go down more smoothly.)

I shopped for this kind of on the spur of the moment – thus, without a list – and did pretty well. But I was baking in my pajamas early Sunday morning when I realized that I had forgotten the mozzarella.  I had two choices: get dressed and run to the store, or punt.

Refusing the change out of my pajamas that early in the day, I rescued some leftover ricotta from the back of my fridge. It worked like a charm!  It won’t melt and spread, though, so use your finger and a spoon to make tiny little drops of choose to dot each layer of the tart.  It’s super creamy when you bite into it, like lasagna, and makes the tart’s texture great.

I would be proud to carry this dish into someone else’s home, but I fear that the leftovers will sit in the back of my fridge for a while before we throw it down the garbage disposal.

Between my passion for eating sugar cookies (my favorites are the ones my office occasionally gets when Trotter’s To Go caters our events) and my last week spent away from the kitchen due to a near-deadly cold, I was fairly excited to work on this week’s Tuesdays with Dorie selection of traditional sugar cookies. AND I had a stash of colored sugars and sprinkles in my pantry that I’ve been ready to part with for a while, so I was ready for action when I pulled out the ole’ KitchenAid this weekend.

I made the cookies exactly as Dorie recommended, and it totally paid off. The cookies are the perfect creamy color, they taste clean and simple. I would buy them from a bakery if I didn’t know how to make them myself.

But here’s the thing: I used this experiment as a reason to clean all the old sugars and sprinkles out of my pantry. And while I share the Engineer Baker’s aversion to frosting and piping and rolling and cutting, I was prepared to go the extra mile this time for something cute. Well, maybe the extra half-mile. 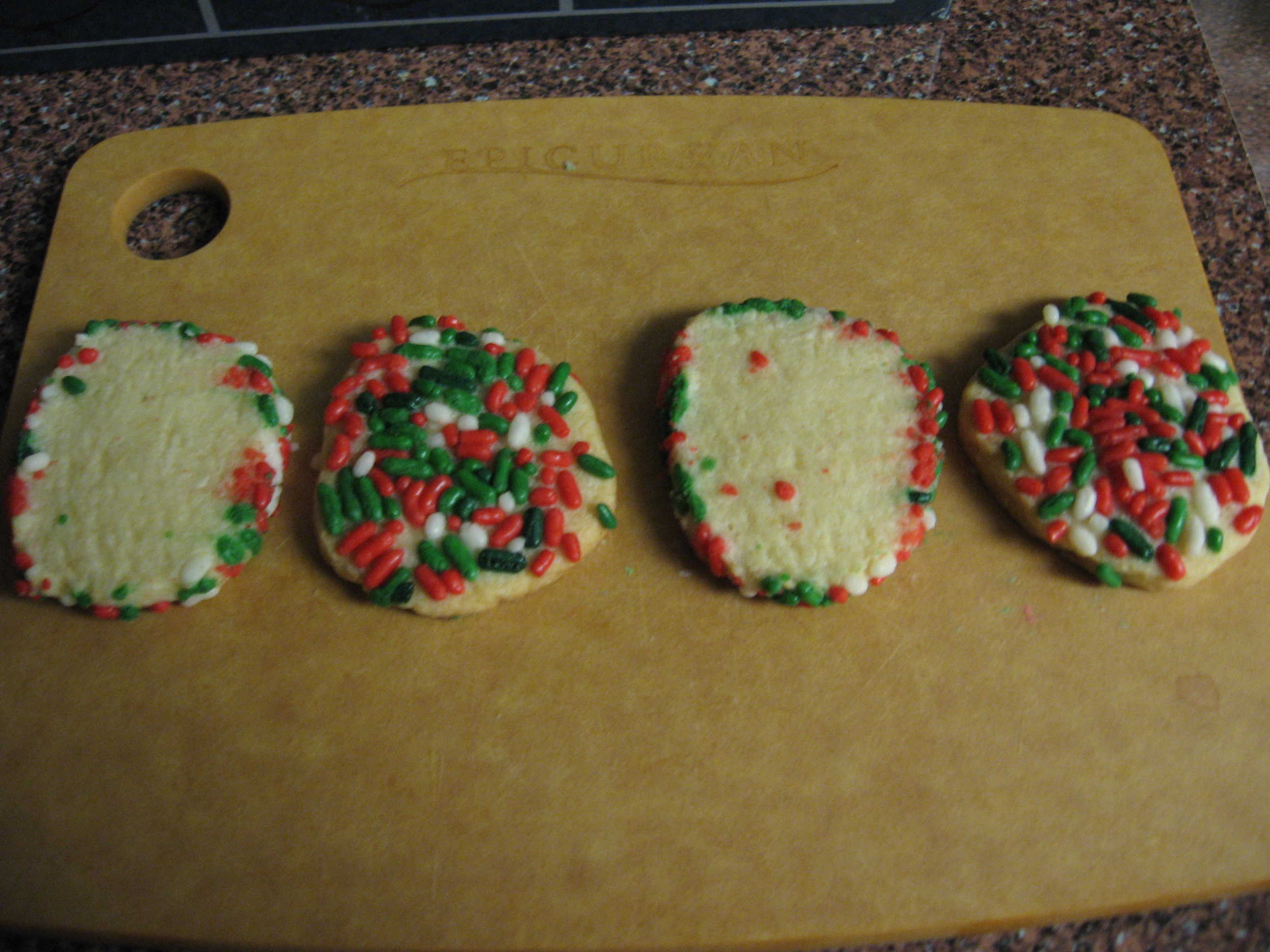 I rolled the logs of chilled dough in sprinkles before slicing some of the cookies, and for others mashed individual slices of  dough in a pool of sprinkles.  For me, this IS festive. Next time I need to find some prettier things to roll the dough in.

My TWD colleagues, however, went all out!  Check out their finished products.  for some great ideas. (The embedded links will take you to a few of my favorites!) Click over to this German TWD blogger for the recipe, and then visit the comments section of the TWD site hfor some great ideas for improvements, too.