The women from the 1950s television archives – Gracie Allen, Lucille Ball, Audrey Meadows and all the rest – had the best dresses to show off spectacular figures: tiny waists with flared skirts and shirt tops that allowed them to wear their most comfortable bras and hid anything else they weren’t too proud of.

Their waists were tiny, of course, because the food was horrible.

I’ve got in my collection a cooking magazine from 1950. It’s called the 1000 Recipe Cook Book, issue No. 5, and retailed for a quarter.  (My mom paid twice that when she found it as a resale shop a few years ago.) The back page features an ad from Chiquita Bananas to serve pan-friend bananas alongside “meat.” The letter from the editor explained, in part:

It’s early summer time, now that this latest copy of the 1000 RECIPE COOK BOOK reaches you. You are, perhaps, one of the millions of American homemakers with a little garden, your own strawberry bed, or an ambitious apple tree in the back yard! If not, you’re likely to see heaps of these beautiful fruits and vegetables in the market, and at tempting prices.

And so, with visions of dinner on the patio dancing in my head, I tried two recipes from the book.  I passed on the stuffed bologna salad and jellied salad mold, the snow-mound eggs (hard boiled eggs with cream of chicken coup and pimento) and lamb neck slices in favor of the Dixie Spoon Bread and the Cream Cheese and Pickle Dip.

The Dixie Spoon Bread is bland, but otherwise ok.  I cringed for a second as I melted Crisco into a pot of milk, water, sugar and cornmeal, to be combined later with eggs and more milk, but I survived.  I served it alongside a crockpot roast-in-beer-based-gravy over a bed of riced cauliflower and broccoli, and it was fine. But no one asked for seconds. Later in the week I tried it with a pork bolognese that had been amazing over polenta.  The spoon bread was a terrible pairing. 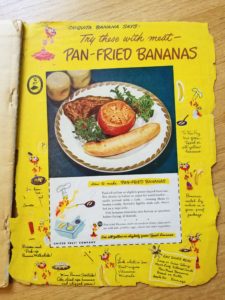 The Pickle Dip is awful.  Cream cheese, cream, pickle relish and onion powder (the recipe called for onion juice – huh?) had potential, but the combination fell far short. It’s runny and tangy in a way that suggests the dairy products turned.  I even tried hiding it on a turkey sandwich and still, it was awful.